After decades of smooth sailing, the FBI statistics program that police, policymakers and the public turn to as a reliable guide on trends in crime is in choppy water.

When the bureau retired a nearly century-old reporting system last year, roughly 40% of the nation’s 18,000 law enforcement agencies weren’t ready to use its replacement.

The result is a massive new hole in America’s nationwide crime database, which now lacks reports from thousands of police departments, sheriffs’ offices and other cop shops across the country. With local governments struggling to upgrade to the new FBI regime, the problem is expected to persist for years.

That’s all according to a new report by Weihua Li, a data reporter at The Marshall Project. Her story, published Tuesday, explains the problem in depth.

While reporting the piece Li acquired an FBI data dump of the thousands of local law enforcement agencies asked to send in crime reports. She analyzed the release to determine which agencies are participating in the new reporting program, and which aren’t.

Her work is now published in the Big Local News data portal and freely available for all journalists. With a few minutes work, any reporter can download the file and discover agencies in their area that are failing to comply.

“There are 7,000 agencies that didn’t give data to the FBI. We can’t write 7,000 stories,” Li said in an interview with Big Local News. “But we can help local media get interested in this important topic and pick up the phone.”

The records also include extra information added by Li, offering greater detail about each agency, including how many crimes were reported in the year before the switch.

Reporters at Axios have already mined the database for localized stories in Des Moines, Philadelphia, Phoenix and elsewhere. Reporters in any area could do the same by opening the file in a spreadsheet and filtering to their state, Li said. 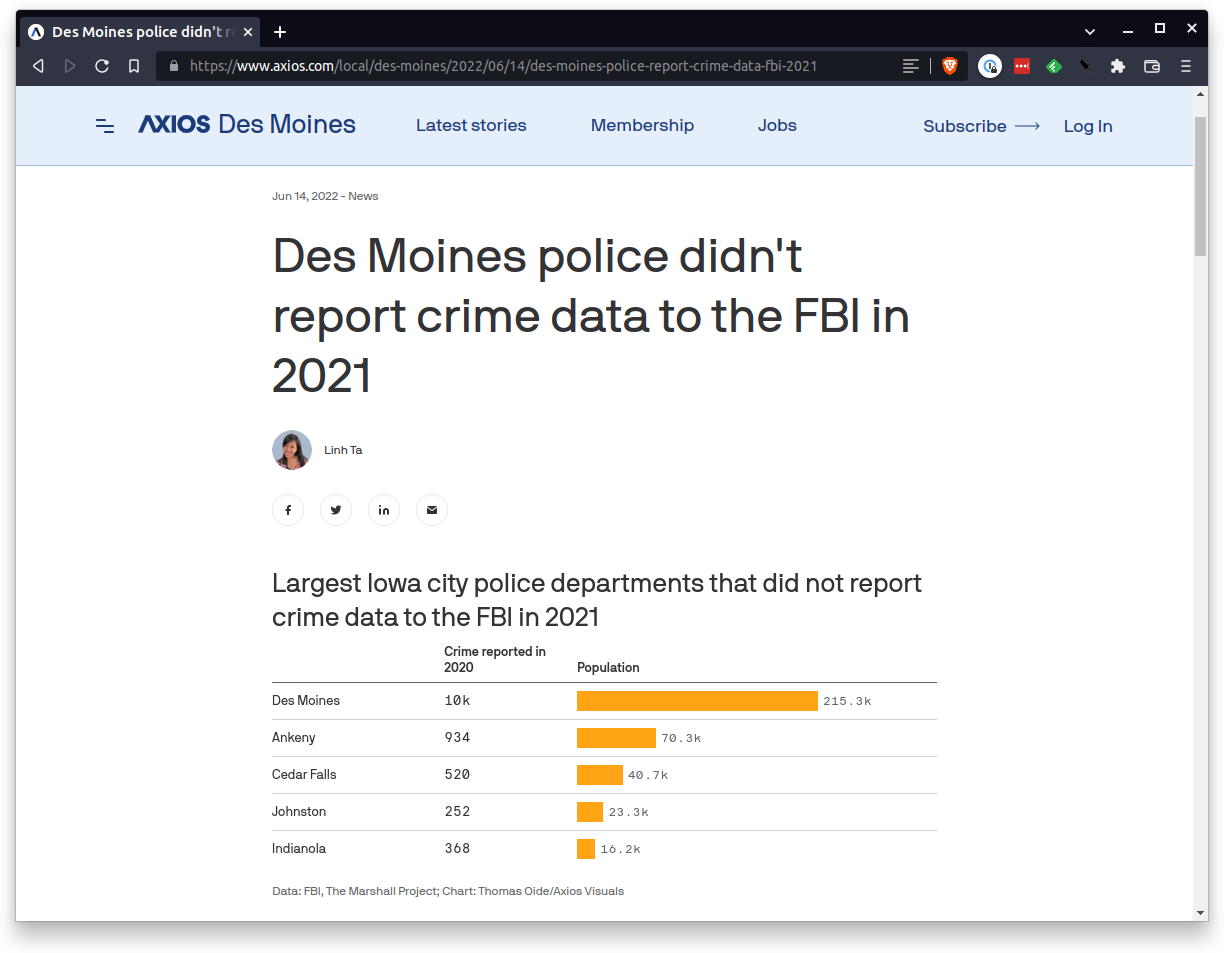 Definitions of all of the data fields are included in the Big Local News portal. The key thing to look at, Li said, is the “months_reported_in_21” field. That column records how many months of data each agency sent the FBI under its new system, which is known as National Incident-Based Reporting System and often referred to by the acronym NIBRS. If the number there is zero, that means the FBI said it didn’t receive data.

If that’s true for an agency in your area, Li advises you call and start asking questions.

“The basic question is, ‘Why you haven’t submitted data?’,” Li said. “Also ask if the agency plans to implement a NIBRS transition? What’s the timeline? And how much money would it cost?”

While she avoids it when writing stories, during interviews Li recommends using the bureaucratic jargon of police so you can quickly build credibility.

“Say NIBRS,” Li said. “For law enforcement, that signals you know what you’re talking about.”

You can learn more insider detail about the FBI program in a recent Big Local News primer on FBI crime statistics. Li welcomed any questions and said she’s eager to see stories that spin off her work. You can reach her at [email protected].

“At the end of the day, millions of violent and property crimes will be missing from the new dataset,” Li said. “We think it’s a big deal not only because that undermines the credibility of the national data, but it also means that for people who live in those jurisdictions their stories won’t get told.”